To celebrate Halloween, SPARC takes a look at a few horror films that use architecture to enhance the story.  In these examples we will briefly explore the role of architecture and interior design in creating mood, defining space, and acting as a character within the films.

Beyond the Black Rainbow

Beyond the Black Rainbow relies on sleek, modern architectural design to convey a disorienting atmosphere. Lighting, color, reflection, and austere materials combine to create an unnerving clinical environment that heightens the anxiety and fear felt by the main character. And yes, she’s sitting on the modern stackable Panton chair.

Don’t Look Now uses the winding canals and ornate architecture of Venice to create a environment that reflects the confusion and psychological distress that is plaguing the main character. As he becomes more distressed, the built environment around him becomes more claustrophobic and confusing.

Eraserhead makes use of nearly pitch-black claustrophobic sets. Shadow and lack of lighting dilute each room until you can’t tell where space begins and ends. In contrast, the exterior scenes use over scaled industrial architecture to enhance the feeling of unease and dehumanization.

The House of the Devil

At first glance, House of the Devil seems to depict the standard creepy house aesthetic seen in countless horror movies. However, this movie differs by effectively creating tension and isolation with the use of light and shadow. Darkened stairs and halls seem to go on forever and characters are framed by architectural elements, enhancing the feeling of being trapped in the built environment.

Night of the Hunter

Using theatrical set design influenced by German Expressionist films, Night of the Hunter creates visually striking scenes that embody moments of unease. Exaggerated architectural elements that look more like theatrical sets, along with light and shadow create environments that reflect the mental state of the characters and effectively heighten the tension for the viewer.

Session 9 uses a real location, Danvers State Mental Hospital, and turns it into the main protagonist of the film. As an asbestos removal crew works on the abandoned structure, its seemingly endless corridors and cavernous rooms begin to reflect the isolation of the characters. The most disturbing aspect of this film is that it almost entirely takes place during bright sunny days.

The isolation of the Torrance family in The Shining is reflected by the enormity of the the spaces they inhabit. The family is dwarfed by large lobbies, ballrooms and maze like corridors of the Overlook Hotel. This relationship between the characters and interior space is one of the main sources of tension in this film. The exterior used for the hotel was the Timberline Lodge, The interior was based on the Ahwahnee Hotel and was the largest set constructed for a film at the time.

Suspiria uses strong lighting and bold colors to create a psychedelic atmosphere that seems to be at odds with the gothic architecture of its setting. Soaring interiors create a feeling of vulnerability while color and light serve to create a disorienting effect. Art Nouveau flourishes are purposely combined with hard line geometric shapes to create deceiving spatial effects.

What are your favorite horror movies? Visit our Facebook page. 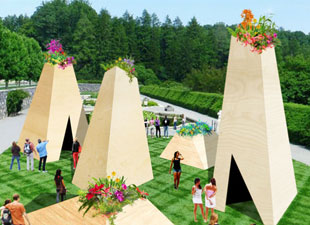 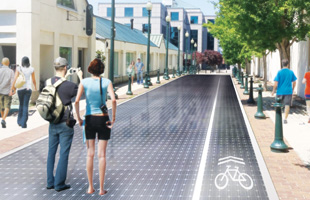 What if Asheville had Solar Roadways?